The Swiftness of the Vikings

One of the secrets of the Vikings’ success was the speed at which they moved. Their longships were probably the fastest things on earth over long distances and they could land and witthdraw their raiding bands far more quickly than their more settled adversaries could mount defences against them.

When the Great Heathen Army landed in England they decided to combine the speed and flexibilty of their ships with the ability to move fast across land. Within a year they had demanded a vast tribute of horses from the kingdom of East Anglia and proceeded to journey across the country to attack every English kingdom.

Within ten years they had conquered Northumbria, East Anglia and Mercia. Their only remaining foe was Wessex. King Alfred has his back to the wall.

The movements of the army at this time were swift and complex as they criss-crossed England in pursuit of treasure and lordship. This map, which you can find on Wikipedia, is the best I’ve yet come across. 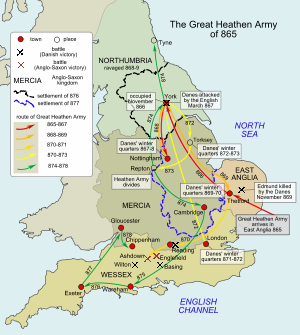 I hope you find it as interesting and useful as I did. Just search Wikipedia for the Great Heathen Army to find it.

If you’d like to take a look at Wolves of War, my book about the Viking invasion of England please click, tap or paste here:

Martin Lake lives in the French Riviera with his wife. After studying at the University of East Anglia he worked as a teacher, trainer and company director. A serious accident shattered his arm and meant that he had to rein back his work. He decided to concentrate on writing and is now writing full-time. He writes a wide range of fiction. His main interests are historical fiction, short stories and fiction for young adults. Martin has a series of novels 'The Lost King' which are set in the years following the Norman Invasion of England. They concern Edgar Atheling, last representative of the ancient English royal dynasty and his fight to regain the throne from William the Conqueror. Martin has also published 'Artful' the further adventures of the Dodger and 'Outcasts' a novel about fall of the Crusader Kingdom of Jerusalem. His latest novel, 'A Love Most Dangerous' is about a maid of honour who becomes the lover of Henry VIII. Martin’s work has been broadcast on radio. He won first prize in the Kenneth Grahame Society competition to write a story based on 'The Wind in the Willows.' You can get the collection, 'The Wind in the Willows Short Stories' from Amazon.
View all posts by Martin Lake →
This entry was posted in Anglo-Saxon era, Historical fiction, Uncategorized, Vikings and tagged Alfred the Great, Amazon, East Anglia, English History, Great Heathen Army, Guthrum, Historical fiction, Ivar the Boneless, Kindle, Longships., Martin Lake, Mercia, Northumbria, Ragnar Lothbrok, Viking books, Vikings, Wessex. Bookmark the permalink.