RUADH BUTLER – WHERE I WRITE

This is a fascinating series. I’m really grateful for the authors who have taken the time to show us a glimpse into their world. Today I’m pleased to have a piece from Ruadh Butler. I’m sure you’ll enjoy it.

‘Where I write’ is an interesting title. Does it mean the desk where I scribble down the story? Or might it also be a question about the setting into which I drop my characters?

Luckily, for me the answer to both questions is the same. Where I write is Ireland – both in the sense that I am physically standing on that little yapping, dog-shaped island off the shoulder of Europe as well as the Emerald Isle being where my books chiefly take place.

Ireland plays a considerable role in my work. More than merely a location or a backdrop, Ireland’s landscape has become as much of a protagonist in my stories of the 12th century Norman invasion as any of the human characters. It moulds and influences the story. Ireland’s geographic features become challenges to be borne, overcome or avoided.

The Ireland where I live and the one in which I write are very different places. The green fields now identified so closely with the country were only created in the centuries after the invasion of Ireland. Before 1169 it was largely a forested land of few roads and impassable bog.

It is a landscape all but lost in favour of ordered fields and agriculture. Pockets of that old world can still be found, however. To help me imagine it I don’t have to go very far from my desk. Rather I can take a couple of steps back and so look out of my window towards the Sperrin Mountains. At Davagh Forest or the mountain bogland around An Creagan, at Beaghmore Stone Circle or the ancient tombs at Creggandevesky, I can get a feel for the Ireland into which the Normans journeyed in the 12th century. Even today it can be a tough landscape in which to walk, but back in the medieval period it must’ve been one of the most challenging terrains imaginable. Foliage would’ve been stifling, conditions underfoot treacherous. Wide grasslands would’ve suddenly disappeared into impenetrable bog, rivers into unnavigable marsh. Throw in the unpredictable Irish weather and you have a landscape which could defeat any army before it ever had the chance to swing a sword in anger.

In my books I try to use this unique landscape to give insight into the emotional state of the lead characters. The feeling of being surrounded is one experienced by Robert FitzStephen in Swordland, the first in my Invader Series. This sentiment is reflected in the landscape around him: encroaching woods, looming mountains, and brimming bogs. 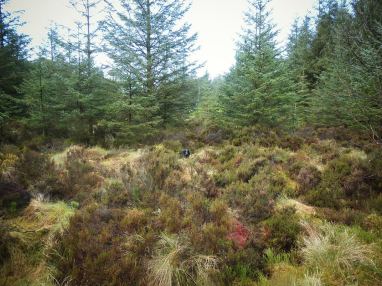 In part two, Lord of the Sea Castle, it is Raymond de Carew’s fear of being overwhelmed by a larger force that dogs him as he journeys to Ireland. I hope that my use of coastal features mirrors the state of mind in which we find Raymond and gives clues to how he will overcome the dread that he will be engulfed.

My writing desk is actually a three-deck open-fronted curio. The keyboard sits on deck two with the laptop/monitor at head height on the top. Ergonomically speaking, standing up to write is one of the best changes I ever made. Most of Swordland was written during lunchtime breaks when I worked as a journalist. Folded up over a laptop, sandwich in hand and feet on my desk, it wasn’t long before I began to suffer with a very sore back. As helpful as it proved, I was not a fan of shelling out money to a physio and knew a change was required. I remembered Michael Jecks and Giles Kristian mentioning that they stood while writing and thought I would give that a go. The back end of Swordland and the entirety of Lord of the Sea Castle were written in this manner and I haven’t had a sore back since.

The curio once belonged to my great-grandmother’s family, the Newtons, who owned an estate in the Blackstairs Mountains from the middle of the seventeenth century. The piece might even have been built from trees felled in County Carlow in the 1800s. I like to think that using the curio gives me a tangible link to the region in which many of the events of the Norman invasion took place. It was below Mount Leinster that Diarmait Mac Murchada and Robert FitzStephen made their last stand in the face of a vast army under the High King in the winter of 1169. It may have been by a nearby mountain pass that they made their triumphant return to Ferns after defeating the Osraighe at Gowran 848 years ago.

Facing into the corner of the drawing room means fewer distractions. Yet despite having my nose less than twenty centimetres from the screen and with little more than a light fitting and a globe in my eye line, I still seem able to find diversions. Tea is a constant requirement while the hockey stick at my side is doubly useful as prop sword for plotting fight scenes and as a diversion when I am trying to think of a particular word or plot point. Damage to the rear of the seat nearby is testament to how often the hockey ball is bashed around in frustration!

Music is always playing in the background as I write. Mogwai, Sigur Ros and Omar Rodriguez-Lopez would be on most often, but I go through periods listening to bands like Explosions In The Sky, Godspeed You! Black Emperor, Oh Hiroshima, and We Lost The Sea. Mostly without lyrics, this is mood-setting music of the highest order. The same bands have been helping me as I continue to write part three of the series. I still stand before the same curio, envisioning the harsh terrains from whence it came. And Ireland will be the setting because, after all, that is where I write. 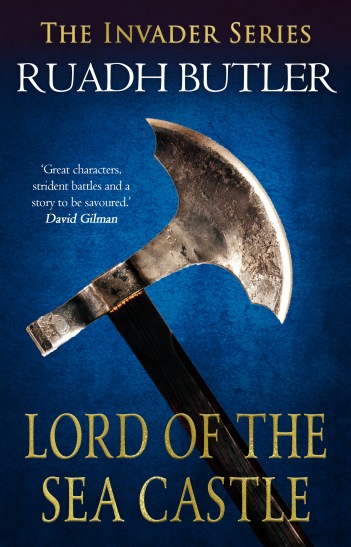 Martin Lake lives in the French Riviera with his wife. After studying at the University of East Anglia he worked as a teacher, trainer and company director. A serious accident shattered his arm and meant that he had to rein back his work. He decided to concentrate on writing and is now writing full-time. He writes a wide range of fiction. His main interests are historical fiction, short stories and fiction for young adults. Martin has a series of novels 'The Lost King' which are set in the years following the Norman Invasion of England. They concern Edgar Atheling, last representative of the ancient English royal dynasty and his fight to regain the throne from William the Conqueror. Martin has also published 'Artful' the further adventures of the Dodger and 'Outcasts' a novel about fall of the Crusader Kingdom of Jerusalem. His latest novel, 'A Love Most Dangerous' is about a maid of honour who becomes the lover of Henry VIII. Martin’s work has been broadcast on radio. He won first prize in the Kenneth Grahame Society competition to write a story based on 'The Wind in the Willows.' You can get the collection, 'The Wind in the Willows Short Stories' from Amazon.
View all posts by Martin Lake →
This entry was posted in Author's Writing Places, Uncategorized and tagged Books, Historical fiction, Ireland, Literature, Ruadh Butler, Short Stories, Writing. Bookmark the permalink.